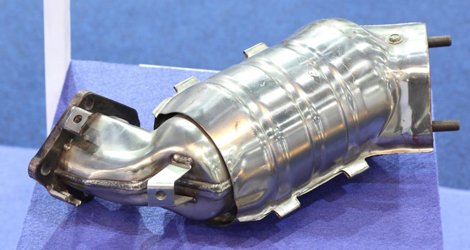 These days the biggest problem that is being faced by mankind is pollution. There is machinery all around us, machinery that emits smoke, and gases that are harmful to all the living beings on the planet. Cities, states and the federal government pass clean-air regulations that limit the amount of emissions that vehicles can emit. We, at Premier Auto Exhaust based in Edmonton, help over clients to overcome this depressing situation.
For more details, call us on: 905-554-1050

With Edmonton having a huge percentage of automobiles, the air is filled with hazardous gases. Experts at Premier Auto Exhaust, who are certified in dealing with these problems and using Catalytic Converters can lead you out of this situation.
Carbon monoxide is a poison to any animal which breathes air. Nitrogen oxides cause smog and acid rain, and hydrocarbons also create smog. The catalyst (in the form of platinum and palladium) is coated in a catalytic converter on a ceramic honeycomb or ceramic beads which are housed in a muffler-like package attached to the exhaust pipe. The catalyst assists in converting carbon monoxide to carbon dioxide. The hydrocarbons are converted into carbon dioxide and water. The nitrogen oxides are also converted back into nitrogen and oxygen.

To get rid of these compounds it is essential to make use of the Catalytic Convertors. Catalytic Convertor suppliers and distributors are available in Edmonton to provide these services. With our years of experience, Premier Auto Exhaust is assisting the Edmonton region with the best of its services.